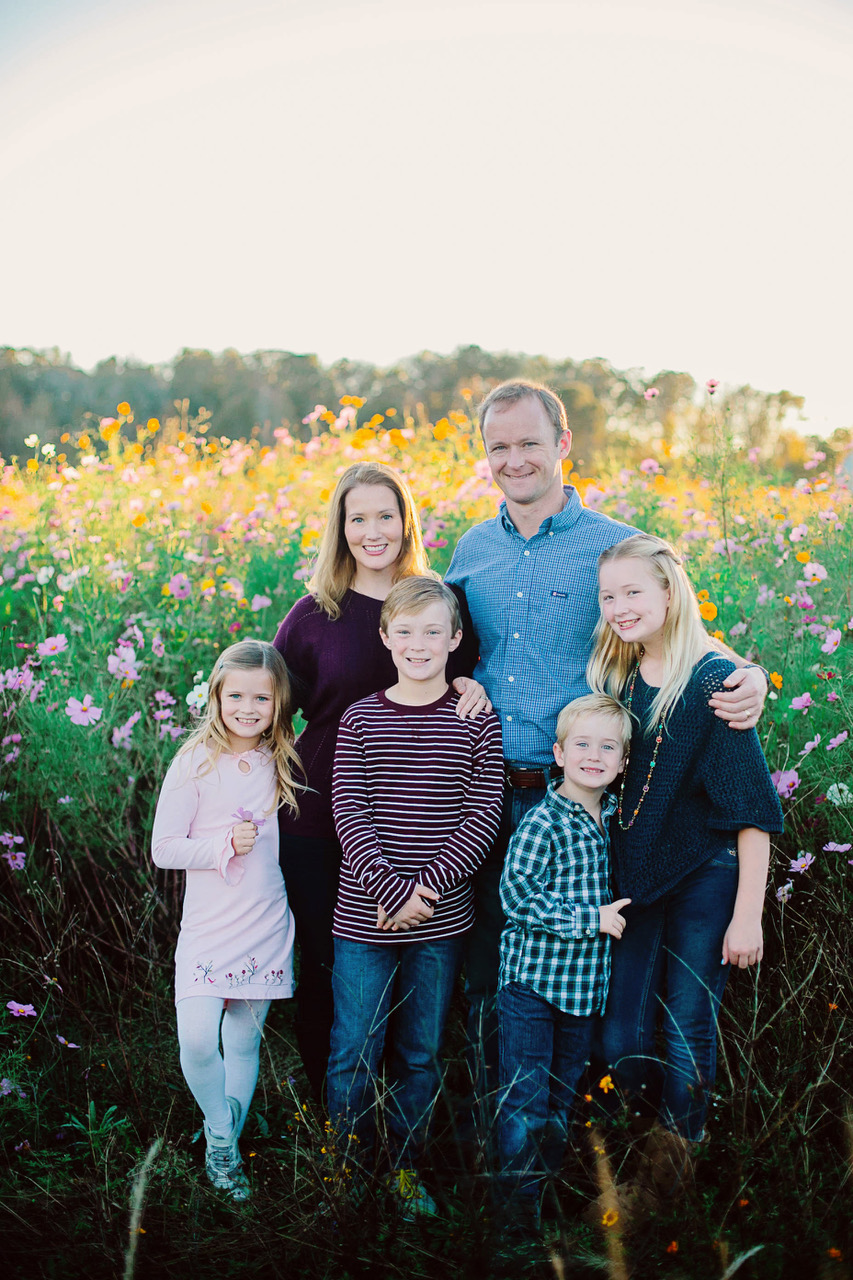 Writing the MilspoFAN Artist Interview blog posts always tickles my “vicarious bone”. I love hearing the unique stories of each spouse and getting to put myself into her (we have had all women so far) shoes for a long, fascinating moment. Without fail, this process brings me a lovely and refreshing perspective, and a sense of wonder and possibility of what this unique lifestyle can be.
This month, our interviewee’s personality bounces off the page. I find myself giggling along with her in one moment and in the next I’m swept up in the verve with which she tells her story. Becky Hepinstall Hilliker is an historian, Navy wife, mother of four, and author. Sisters of Shiloh, which she co-wrote with her sister Kathy, is the story of two sisters who disguise themselves as men in order to join the Confederate Army during the Civil War. Becky’s effervescent enthusiasm for history and delightful sense of humor come alive in her interview and I am so pleased to share her story here on the blog.

After reading the interview, be sure to connect with Becky and the MilspoFAN community– ask a question, tell us your own related story, or pull your favorite quote from the interview and post it in the comments below, or over at our Facebook page or group.  Then grab a copy of Sisters of Shiloh  (here’s a link!)

But first, here’s Becky in her own words…
MilspoFAN: Tell us a little about yourself, your journey as a military spouse, and where you are today.

Becky: I was raised outside of Houston, Texas and have been a lover of history my entire life. I had intended to write history textbooks after I graduated from the University of Texas, but ended up working in the Internet industry just as it began to boom. Yes, I’m that old. While working in Austin, I met my husband, Jesse, where every good Christian girl meets a boy…in a country-dance bar. He was up from flight training in Kingsville for the weekend visiting friends, and the rest, as they say, is history. 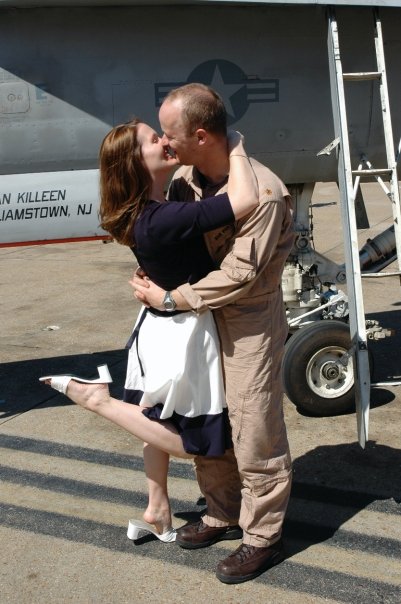 MilspoFAN: What are some of your favorite places to have lived?

Becky: I have to confess, I love moving. Not the stressful mechanics of it, of course, but the excitement of change. Both Jesse and I left for college from the homes in which we were born, so we had never experienced getting to alter your surroundings every few years. We’ve lived in Lemoore, England, China Lake, Virginia Beach twice and Newport, and now we’ve recently been stationed back in China Lake. I’ll admit that the desert isn’t my favorite place, but it has its own kind of unique beauty. Our family motto is that of many other military families – “bloom where you’re planted.” So we try to make the most of any duty station and see and do all there is to offer before we move again.

My very favorite place we lived was definitely England. As a history enthusiast, I was fascinated every second. The very ground there just feels…ancient. We lived less than 3 miles from Stonehenge. The night before the summer solstice, where the sunrise lines up exactly with the stones the same way it has for 5000 years, we actually hiked in the dark using old Roman paths until we joined a huge group of people in the stones to watch the sun come up. That was one of the most amazing moments of my life. I know I should probably mention the birth of my four children as another one of those moments…but really the whole Stonehenge thing was so much better than labor and delivery.

MilspoFAN: You co-wrote Sisters of Shiloh with your sister, Kathy. Tell us a little about that project.

Becky: Sisters of Shiloh is the story of two sisters who join the Stonewall Brigade during the Civil War and fight disguised as men. One sister, Libby, vows to avenge the death of her husband after he is killed at Antietam, and her older sister, Josephine, follows her, determined to keep her safe at all costs. Along the way, Libby begins to descend into madness, and Josephine finds love amidst the turmoil of war, but cannot reveal herself without betraying her sister.

In 2002, after her second novel, Absence of Nectar, was published, Kathy asked if I would like to write a book with her. Although she never shared my passion for the past, when I told her about some of the women who disguised themselves as men and fought in the Civil War, she was equally intrigued. That led to mountains of research and months of writing, but we couldn’t find a publisher at the time. Ten years went by as Kathy went on to write other novels and continue her work in advertising, and I had four children and seven moves to occupy my time. In late 2012 Kathy showed the first half of the novel to her agent and he ended up getting it into the hands of Houghton Mifflin Harcourt. We rewrote the back half and it was finally published in hardcover in 2015 and paperback in 2016.

MilspoFAN: In 2015, Joe Holley wrote that you are a “history fanatic and “indefatigable researcher” (to read his article, click here). How did your passion and academic experience in history lead to co-writing Sisters of Shiloh?

Becky: Growing up Kathy was always a creative genius – you know, the kind that was writing poems at 3 and publishing short stories at 8 and annoying…I mean wonderful… stuff like that. I was obsessed with history and had my nose in a book most of the time. I tried to convince the neighborhood children that I was Queen Elizabeth I, reincarnated and transported to the Houston suburbs by a tornado. And I wonder why no one wanted to come to my birthday parties.

As I began to formally study history, I developed more of a non-fiction writing style and fell even more in love with the true stories of love and loss and triumph and tragedy. I wanted to pursue a career writing textbooks in the hopes that maybe I could write one that wouldn’t put students to sleep.

But, as I said, I stumbled into the world of Internet marketing.I continued to work in that field after Jesse and I were married, but moving overseas for a one-year assignment ended that. It was during  that year that we spent in England while Jesse attended the Empire Test Pilot School that Kathy suggested we write together. She was in Los Angeles at the time, so writing a book together (no FaceTime back then), was a challenge. We communicated by email and phone and faxed pages back and forth.

When we began this process in the fall of 2002, there had been very little written about the subject of the women who fought disguised as men. There were few vetted historical sources available on the Internet, so it was really only used in the process of contacting local historians and experts. We researched this book for about a year and a half, and continued the process while we were writing (undoubtedly, some question would arise within the narrative – what kinds of objects might be in the scene, what flora and fauna would be nearby, etc.).

During trips back from England, I dragged Kathy to all of the battlefields and walked the fields with Park Rangers, trying to envision what it would be like for the characters. We spent a week at Antietam and were lucky to get to meet repeatedly with a National Park Service Archaeologist. We met with local experts in the Winchester and Sharpsburg areas. I also researched in the Handley Library in Winchester, and in the Fredericksburg and Spotsylvania National Battlefield Park Archives at Chatham Manor. We poured over scores of books we found about the period, including several first-hand accounts. We studied what people of the period wore, what they ate, how they spoke and how they acted.

I loved every second of the research. Kathy started drinking. Just kidding…not really.

MilspoFAN: Holley’s article also mentioned an upcoming project about Nachthexen. The description sounds completely fascinating. Can you tell us a little about this project and if this book still in the works?

Becky: I’ve developed an appreciation for aviation, having been with a pilot for nearly 20 years now. That’s a nice way of saying “I have been to 763 airshows, mostly against my will.” But I was really intrigued when I learned about the “Nightwitches,” Russian female bomber pilots who played a big role in Russia’s air combat during World War II. Much like with the women soldiers of the Civil War, there has been very little written about these incredibly fierce women. Kathy and I originally thought we’ d write another historical novel about them, and that may still happen, but right now I’m thinking that I might like to try my hand at a narrative non-fiction book about them first.

MilspoFAN: Many MilspoFANs and Military Spouses are interested in balancing creative work with family and the demands of their spouse’s career. What does your work-life balance look like on a typical day? What logistical advice can you share with readers about how to keep working passionately through PCS-ing, raising children, deployments, and all the rest of the excitement that comes with the Military Spouse lifestyle?

Becky: I certainly haven’t figured it all out. Right now I’m in a new town with four kids playing six sports and a husband who travels frequently (but, thank goodness, not currently deploying). I’m lucky if I manage to feed them all on a daily basis. I am trying to work on another book, but the days just slip by. But as my oldest just turned 13 (Lord, help me), and my husband passed the 20 year mark in the Navy, I see how very quickly it all goes by. Before I know it, I’ll have plenty of time to devote to writing.

My only advice to my fellow military spouses is this: GIVE YOURSELVES A BREAK. We are our own worst critics and it is so easy to get into a shame spiral. We feel guilty that we’re not giving enough attention to our careers, our kids, our spouses, our communities or our spouse’s groups. Our houses aren’t clean enough and the laundry is never done. It’s. Never. Enough. Carrying around all that guilt and frustration can really start to drag you down. And that’s not even touching the stress that comes with deployments and frequent moves.

I’ve really struggled with this habit of beating myself up, so I’ve been actively trying to create little victories for myself. And to carve out a few moments of time just for me every day. Just a few minutes where I sit with my notebook and jot down whatever I can. And then I tell myself “I have done something that matters to me today.” This makes me feel like I’m making progress and really helps me to build positive momentum and not obsess about all of the ways I feel like I’m failing. It’s amazing how one simple change like that can transform your whole outlook.

MilspoFAN: Where can I find more information about the women who inspired Sisters of Shiloh?

Becky: If anyone would like to know more about the real women who fought in the Civil War , below are links to some articles I wrote for Ancestry.com -.

Thank you, Becky for sharing with us here on the MilspoFAN blog!

Want a little more from Becky? Check out her guest blog post on USAToday about what it was like to write Sisters of Shiloh as a Navy wife (yes, this piece also made me giggle!): http://happyeverafter.usatoday.com/2015/03/06/kathy-and-becky-hepinstall-sisters-of-shiloh-navy-wife/

And remember, readers, we truly need your feedback to keep the community growing and vibrant. Please do comment, like, share, and spread the word about MilspoFAN and about our dear artists! Even the smallest acts can make a huge difference.